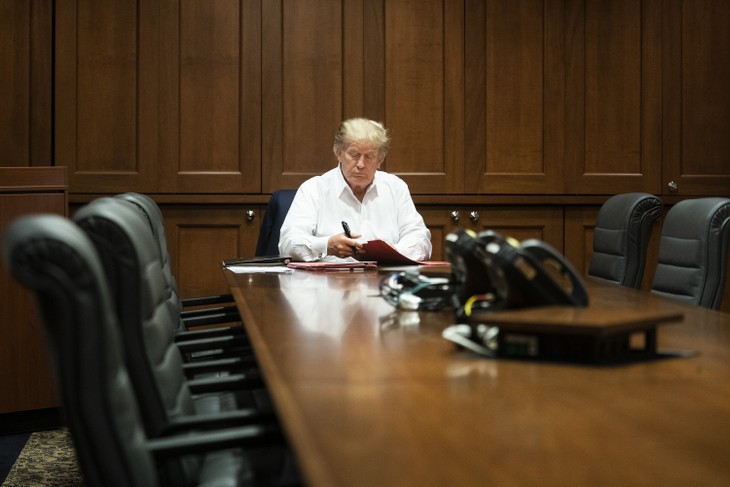 On Saturday night, the White House released photos showing President Trump doing the business of the American people from Walter Reed Medical Center. The photos launched a series of conspiracy theories from the media, which seems desperate to cast a dark cloud over Trump’s stalwart commitment to continue doing his job as president.

Perhaps worried that the optics of President Trump doing work from Walter Reed might help him politically, several in the media started scrutinizing the photos, looking for details that could undermine the narrative that Trump was truly hard at work. And the best they came up with was that in the photos it appears Trump is signing “a blank sheet of paper.”

NEW: The White House has released these photos which purport to show @realDonaldTrump "at work" at Walter Reed National Military Medical Center. pic.twitter.com/vSRcH7o2Hq

So, let’s answer the question: Does the above photo show President Trump signing a blank sheet of paper?

Considering that most people now use smartphones with digital cameras on them, we’ve learned some basics about photography just from experience. The source of light and the object a camera is focusing on plays a huge role in how a photo will turn out. In the above photo, we have President Trump at a table with a white sheet of paper lying flat, directly under a light source. White, as most people know, reflects light. And assuming the photographer was focusing on Trump’s face (even my Nikon camera focuses on faces automatically) then it’s quite obvious why it would appear that the paper Trump is signing looks blank, save for Trump’s signature. If the document being signed was using 12- or 14-point type, those details may very well have been washed out by the brightness of the paper under the light source, while the thick signature made with a Sharpie would be the only detail to stand out.

You can actually test this out on your smartphone.

Below I have two photos I took this summer with my iPhone. They were taken at the same spot, within seconds of each other. Aside from minor movements of the camera, the only thing that has changed between these two photos is what I’ve told the camera to focus on, the clouds, or the foreground. Yet, look at the dramatic differences between the two shots:

Did those clouds suddenly disappear? Were they never there to begin with? The answer is, obviously, no.

While this doesn’t necessarily prove the page wasn’t blank, it does tell us how irresponsible the media has been in suggesting that it was.

This is not the first time the Trump White House has been accused of staging photos. In 2019, former Obama White House photographer Pete Souza accused the White House of staging the photo of Trump watching the raid that killed ISIS leader Abu Bakr al-Baghdadi. He eventually backtracked, but not before thousands of his followers had echoed the allegations. Souza made his accusations despite the fact that his infamous photo of the bin Laden raid in the Situation Room was, according to Accuracy in Media, staged. Further, as details emerged about the bin Laden raid, it became clear that the official Obama White House story about what happened had been embellished. In fact, according to Obama’s former Secretary of Defense Leon Panetta, it was Navy SEALs, not Obama, who ultimately made the final decision to kill bin Laden. Obama reportedly was playing cards in another room rather than actively monitoring the raid.

The anti-Trump media seems to understand that Trump working from Walter Reed could boost him politically. This seems even more likely considering that the Biden campaign called another lid on in-person events early Sunday morning.