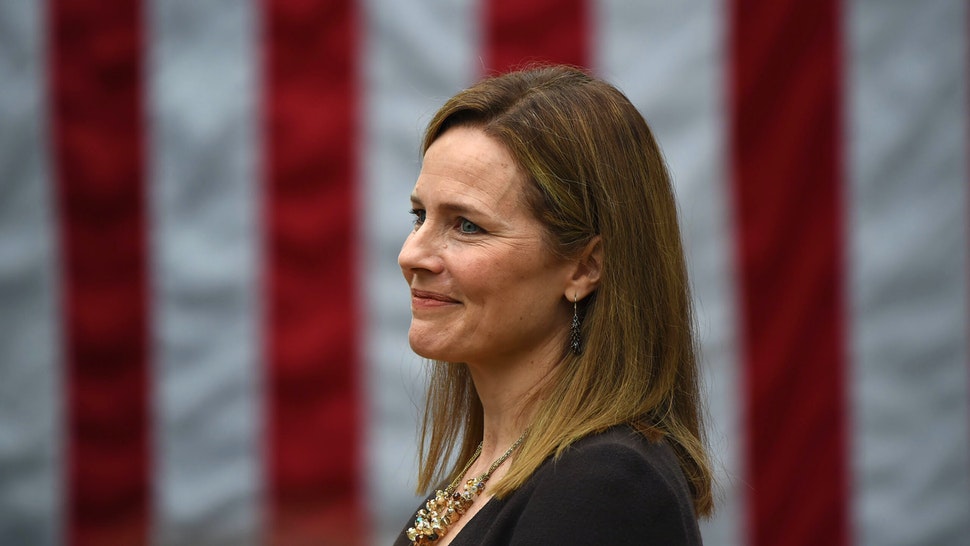 The flag of the United States is still flying at half-staff in memory of Justice Ruth Bader Ginsburg to mark the end of a great American life,” Barrett continued. “Justice Ginsburg began her career at a time when women were not welcome in the legal profession—but she not only broke glass ceilings, she smashed them. For that, she has won the admiration of women across the country, and indeed, all over the world. She was a woman of enormous talent and consequence, and her life of public service serves as an example to us all.”

Thank you very much, Mr. President. I am deeply honored by the confidence that you have placed in me, and I am so grateful to you and the first lady, to the vice president and the second lady, and to so many others here for your kindness on this rather overwhelming occasion.

I fully understand that this is a momentous decision for a president, and if the Senate does me the honor of confirming me, I pledge to discharge the responsibilities of this job to the very best of my ability. I love the United States, and I love the United States’ Constitution. I am truly humbled by the prospect of serving on the Supreme Court. Should I be confirmed, I will be mindful of who came before me. The flag of the United States is still flying at half-staff in memory of Justice Ruth Bader Ginsburg to mark the end of a great American life. Justice Ginsburg began her career at a time when women were not welcome in the legal profession—but she not only broke glass ceilings, she smashed them. For that, she has won the admiration of women across the country, and indeed, all over the world. She was a woman of enormous talent and consequence, and her life of public service serves as an example to us all.

Particularly poignant to me was her long and deep friendship with Justice Antonin Scalia, my own mentor. Justices Scalia and Ginsburg disagreed fiercely in print without rancor in person. Their ability to maintain a warm and rich friendship despite their differences even inspired an opera. These two great Americans demonstrated that arguments, even about matters of great consequence, need not destroy affection. In both my personal and professional relationships, I strive to meet that standard.

I was lucky enough to clerk for Justice Scalia, and given his incalculable influence on my life, I am very moved to have members of the Scalia family here today, including his dear wife Maureen. I clerked for Justice Scalia more than 20 year ago, but the lessons I learned still resonate. His judicial philosophy is mine, too. A judge must apply the law as written. Judges are not policymakers, and they must be resolute in setting aside any policy views they might hold. The president has asked me to become the 9th justice, and as it happens, I’m used to being in a group of nine, my family.

Our family includes me, my husband Jesse, Emma, Vivian, Tess, John Peter, Liam, Juliet, and Benjamin. Vivian and John Peter, as the president said, were born in Haiti and they came to us five years apart when they were very young. And the most revealing fact about Benjamin, our youngest, is that his brothers and sisters unreservedly identify him as their favorite sibling. Our children obviously make our life very full. While I am a judge, I’m better known back home as a room parent, carpool driver, and birthday party planner. When schools went remote last spring, I tried on another hat: Jesse and I became co-principals of the Barrett e-learning academy—and yes, the list of enrolled students was a very long one. Our children are my greatest joy even though they deprive me of any reasonable amount of sleep.

I couldn’t manage this very full life without the unwavering support of my husband, Jesse. At the start of our marriage, I imagined that we would run our household as partners. As it has turned out, Jesse does far more than his share of the work. To my chagrin, I learned at dinner recently that my children consider him to be the better cook. For 21 years, Jesse has asked me every single morning what he can do for me that day. And though I almost always say “nothing,” he still finds ways to take things off my plate—and that’s not because he has a lot of free time. He has a busy law practice. It’s because he is a superb and generous husband, and I am very fortunate. Jesse and I have a life full of relationships, not only with our children, but with siblings, friends, and fearless baby-sitters, one of whom is with us today. I am particularly grateful to my parents, Mike and Linda Coney.

I have spent bulk of my adulthood as a Midwesterner, but I grew up in their New Orleans home. And as brother and sisters can also attest, mom and dad’s generosity extends not only to us, but to more people than any of us could count. They are an inspiration.

It is important at a moment like this to acknowledge family and friends, but this evening I also want to acknowledge you, my fellow Americans. The president has nominated me to serve on the United States Supreme Court, and that institution belongs to all of us. If confirmed, I would not assume that role for the sake of those in my own circle, and certainly not for my own sake. I would assume this role to serve you. I would discharge the judicial oath, which requires me to administer justice without respect to persons, do equal right to the poor and rich, and faithfully and impartially discharge my duties under the United States Constitution.

I have no illusions that the road ahead of me will be easy, either for the short-term or the long haul. I never imagined that I would find myself in this position, but now that I am, I assure you that I will meet the challenge with both humility and courage. Members of the United States Senate, I look forward to working with you during the confirmation process, and I will do my very best to demonstrate that I am worthy of your support.

This article has been updated to include the full text of Amy Coney Barrett’s speech.